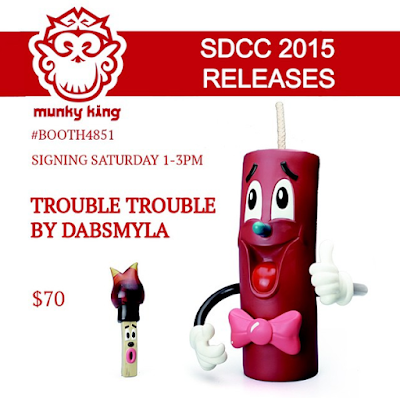 Did you watch the MTV Movie Awards?  Yeah, me neither.  I would much rather remove one of my eyes with a spoon than watch just about anything on that channel.  Ok, I do get a kick out of True Life, and for some reason I can still be suckered into watching the Real World for some reason, even if it's just in hopes that the house catches fire with all of them in it.  So let me revise my previous statement:  I would rather remove one of my eyes with a spoon than watch MOST of the programming on MTV.  Sometimes you just gotta slum it.   Then I found out Dabs Myla designed the set for the Movie Awards and I was mildly tempted to watch it, but then I also realized that still photography is a thing and I could enjoy their work without having to risk hearing a Kanye West song.

The couple create artwork that practically begs to be made into toys, yet this is surprisingly their first foray into the vinyl world.  Munky King will be debuting this delightful stick of dynamite and his stressed out match friend at this year's San Diego Comic Con.  If you can't make it to the show because you're busy auditioning for Teen Mom 8 don't worry, they're gonna be available later on at https://www.munkyking.com/.
Posted by Chris at 4:23 AM