I Kinda Need This Godzilla Plush from Steiff 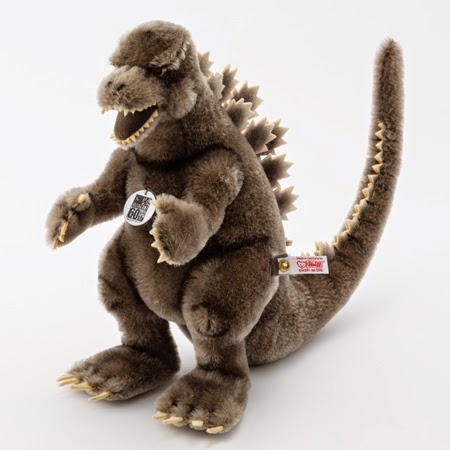 Between my wife and I, we have a crazy amount of stuff that we collect.  One of my favorite things to hoarde is antique Steiff stuffed animals, which always shocks people.  It's not the mummified fetal pig, or the at home shock therapy device, it's the little German critters covered in mohair that leave everyone surprised.  I like things that have a story behind the object.  A few that I have were once owned by a young girl whose father bought them for her when she was in the hospital and she kept them next to her in bed until she recovered.  She would be in her 80's or 90's now if she is still alive and I feel like I am the caretaker of these objects that aided in her recovery.  It's rare that you get insight like that into the journey that something has had before you came upon it, and it's the stories that really make them worth beyond any monetary sum.

I don't own any of the newer Steiff toys, but I could be easily persuaded to change my collecting scope to add this Godzilla to my display case.  Does it get any more amazing than this?  They made 1,954 of these to coincide with the year the first movie was released and they will only be available in Japan to the tune of $500 each.  I don't know that I've ever spent $500 on anything other than something I could drive or live in and just the thought of doing so is starting to clog my arteries.  Let's pass the hat around and take up a collection.
Posted by Chris at 5:51 AM