You're gonna wanna go ahead and click on that video you see there to set the proper mood for this toy review baaaaaaaaaaaaaby.  That's right, just move your cursor over to the play button, press it, and let the smooth sounds of Marvin Gaye prepare you for what it sure to be the greatest, and I mean greatest, thing you will see all day.  Are you ready?  Is your soul in the mood for love?  If you said "yes" then I'm gonna need you to scroll down a little further so the festivities can begin.... 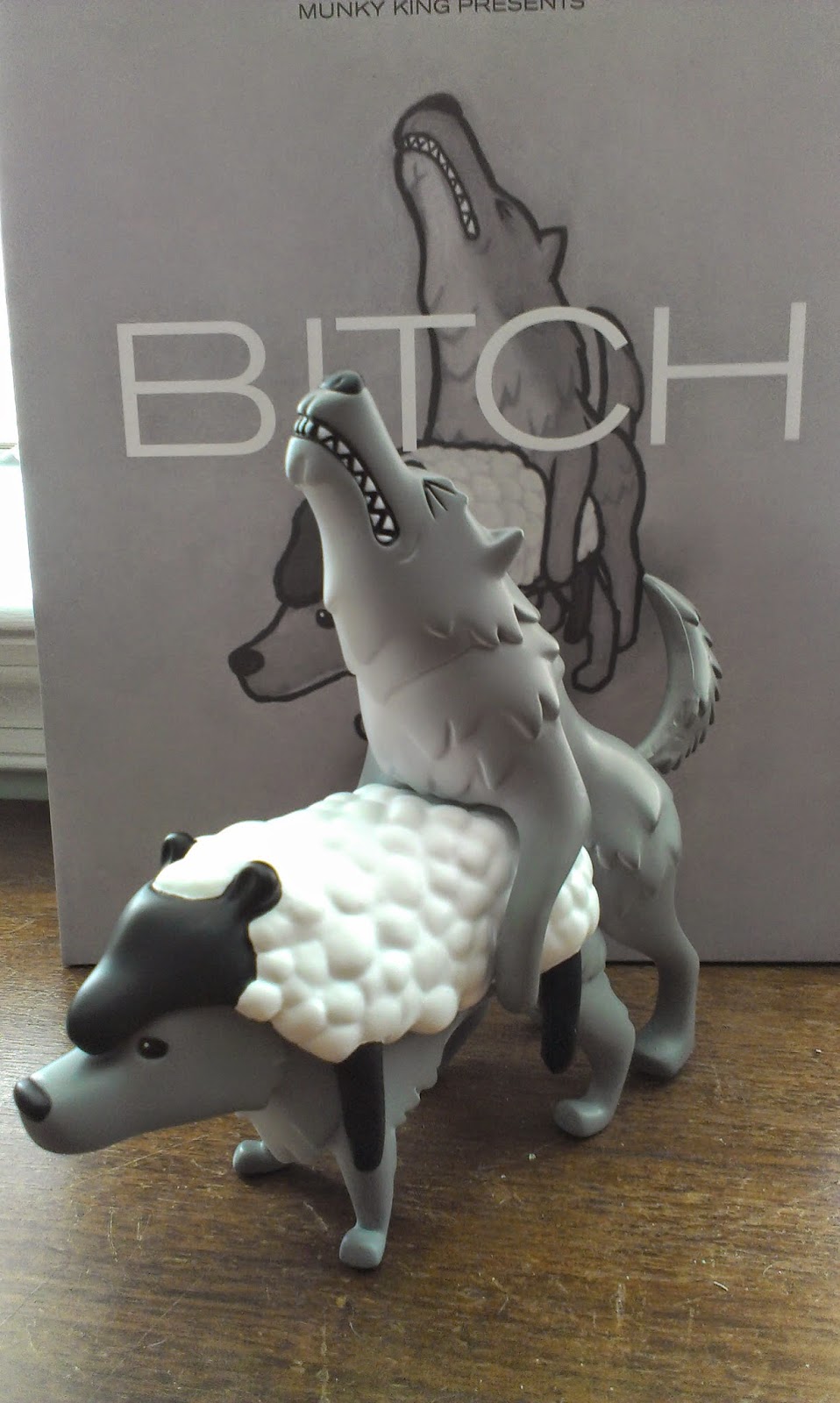 Oh dang,  you didn't see that coming did you?  But to each his own I suppose, cause these wolves shouldn't be ashamed of how they express their love, even if it's more Lil Wayne than Marvin Gaye.  You've never seen a toy like the one that Luke Chueh and Munky King have created here.  Provocative is the first word that comes to mind, which is not a bad thing by any means, because most of the time good art is exactly that.  And being that this toy is taken directly form one of Luke's paintings (you can kind of see it on the box in the back round) it captures all of the meaning that the original work had.  Now, what that meaning is I have no idea, but that's not gonna stop me from sharing the one's I came up with:

-  Or he could be the government in general, who has labeled us all as sheep and who takes great pleasure in metaphorically screwing us at every turn

- They could be a perfectly normal couple who have decided to spice up their relationship by playing dress up (I always try to get my wife to dress up as Margaret Thatcher when she cooks dinner.  That's probably more to do with a head injury I suffered as a youth football player though)

What I dig about this toy is that it pushes boundaries of what a designer toy should be.  It's kinda cool to have to think a little bit beyond whether or not something is cute while at the same time having to look past whatever awkwardness we may feel about our in-laws knowing there are two plastic wolves makin puppies on our entertainment centers.  The term "art multiple" gets thrown around a lot when describing designer toys but there are very few that I could expect to see for sale in the gift shop of a modern art museum.  I think this one fits that bill, from the toy itself to the slim packaging.

Now I know some of you may want to buy this toy cause you like it but fear having to explain to your young children exactly what's going on here.  I get that your house may be more Disney than National Geographic, so I have taken the liberty of utilizing the convenient 3 piece construction to create two alternate scenes you can use to avoid all birds and bees talk: 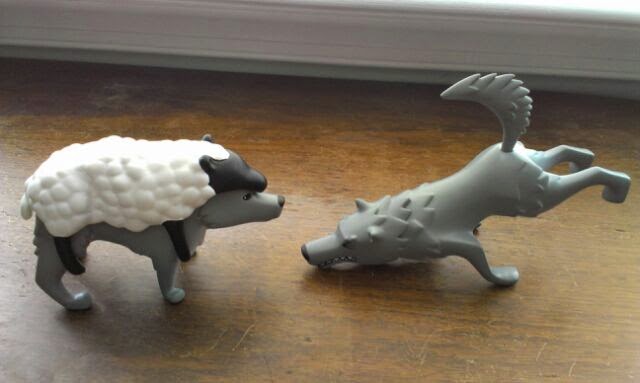 In this scenario, two wolf friends are attending comic con.  One has chosen to dress up as his favorite character Super Sheep, while the other has just complained the whole time about waiting in line.  While  rushing to get to the next long line the crabby wolf trips over someone's fake sword and falls on his face, much to the hilarity of his costumed friend.  End scene. 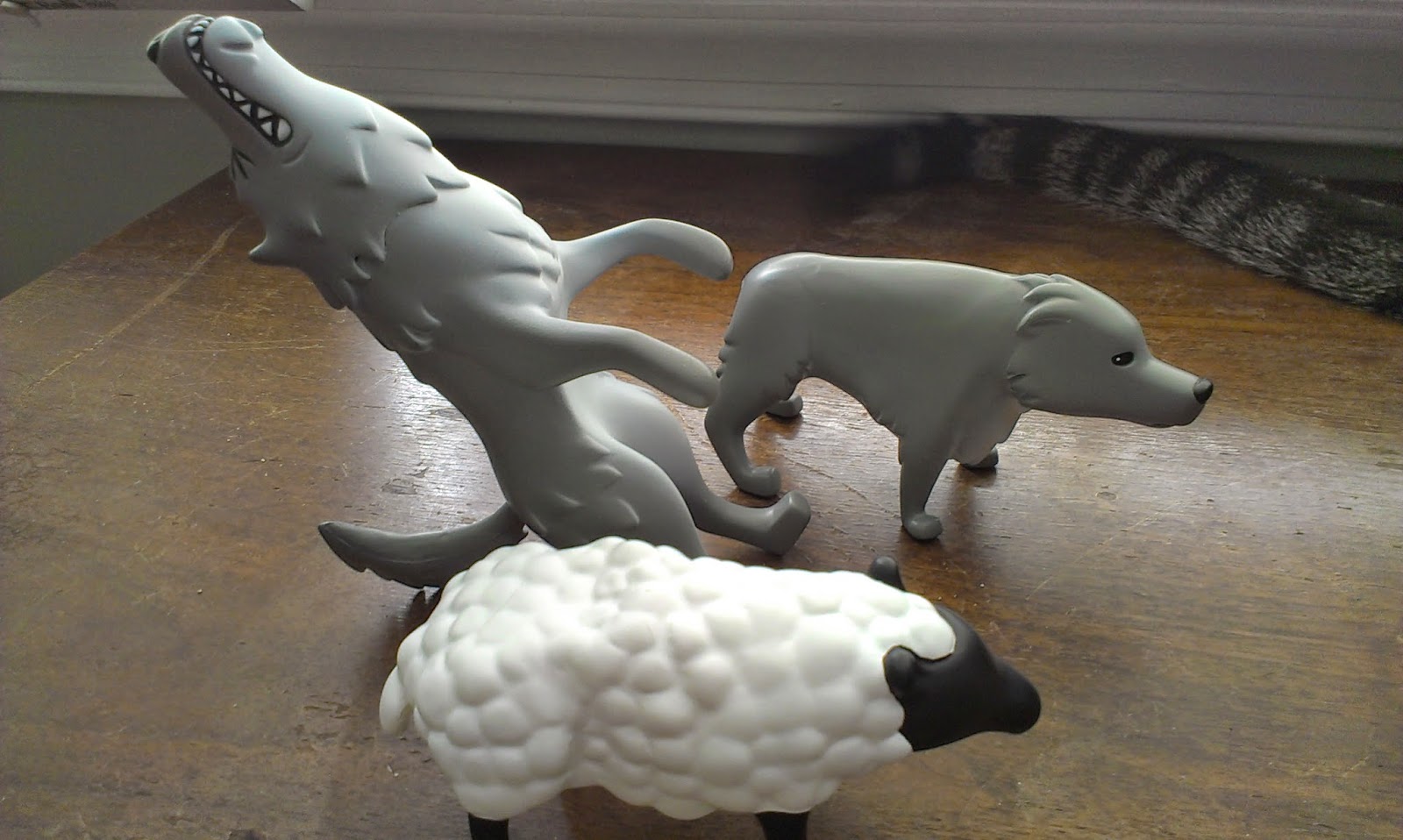 In this next one, the two wolves and the sheep are enjoying a festive spring break at the Jersey Shore, when all of a sudden one of them makes eye contact with some meathead's girlfriend.  Having just downed a protein shake and 13 shots, the meathead delivers a brutal uppercut to the one wolf, while his friends get ready to do battle.  So many spray tans were ruined that night.  End scene.

Those are just two quick ones for you, but the possibilities are endless!  And they're also interchangeable with all of the other editions, so you can mix and match em however you like.  This original version (that takes its color scheme directly from the painting) will be available early in March from www.munkyking.com.  They are limited to 500 pieces and will retail for $69 (I see what you did there you cheeky little monkeys).