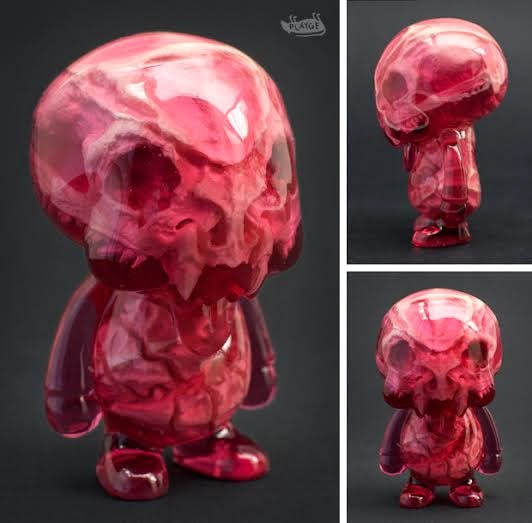 Did you know the yuck that causes pink eye can live on a surface for a month?  I only know this because it's an occupational hazard where I work; one which I've been fortunate enough to avoid.  Of course, pink eye is not the worst thing you can contract from another person, but it's pretty gross.  No wants to wake up with their eye crusted shut and looking like the weeping dead.

I don't know what would cause something like this to happen to you, but I'm sure Jenny McCarthy will tell you not to vaccinate against it.  Who would have thought some idiot television personality wasn't in fact the utmost authority when it came to infectious diseases?  Crazy.

Ferg and Grody Shogun's Young Gohst is looking like he may need a trip to ye old apothecary to get a tube of ointment.  Anything you need a tube of ointment for just sounds like the grossest thing possible doesn't it?  I don't know what ails him, but it looks contagious.  This resin figure has been given the "infected" treatment from Scott Wilkowski and is available for preorder right now from Lulubell Toy Bodega.  You have until March 1st at 9am pacific time to secure yourself one for $70.  Maybe if you lick it you'll build up your immune system.