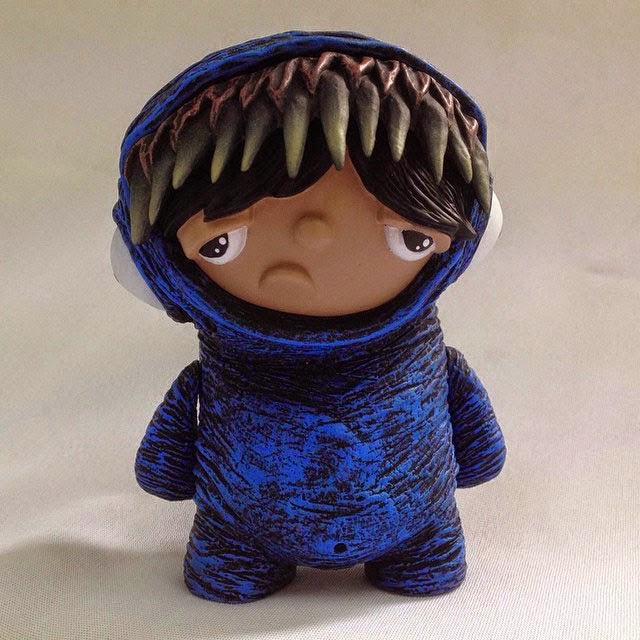 Why so blue panda bear?  Cause he's a Tenacious Toys exclusive, duuuuuuuuuuuuuuuh.  It's kind of their thing, which I'm all about because I like consistency.  I like to know that I will never get a full night's sleep because one of the cats will knock something over, scare the others into a feline stampede, and ensure that I nearly have a heart attack.  I like to wake up in the morning and know that I have a delicious box of Cap'n Crunch waiting for me.  I like to think that if I mention how delicious Cap'n Crunch is two sentences in a row that maybe they'll send me some free cereal cause that stuff ain't cheap.  I'd like free cereal to become a consistency.

It feels like just last week that I wrote a pretty baller review of Nerviswr3k's "Inner Child" figure.  Actually, it was just last week, so if you missed it you won't have to scroll too far back in the archives to bask in it's glory.  But before you bask, or afterwards if you promise to come back, you should know that this little monster is limited to only 125 pieces and will be on sale starting February 28th at noon eastern time only from http://www.tenacioustoys.com/.  They will have the red version available as well.  This toy was produced by the fine folks at Suburban Vinyl.
Posted by Chris at 5:58 AM