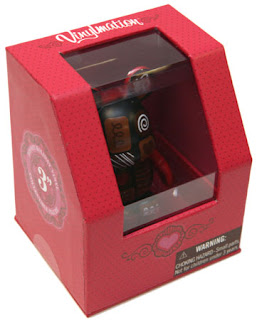 The Vinylmation series of figures from Disney has created quite a stir in the world of collectables.  Some people hate them because they feel that their sacred vinyl toys are now being embraced buy the mainstream which then makes them officially "not cool".  Other people love them because it exposes and entire new group of folks to toy collecting who may have never even heard of vinyl toys, let alone considered buying one.  I am part of the latter group.  While I may not be a huge fan of Disney and I may not like a lot of the designs they come up with, I do enjoy the fact that these toys have managed to create a frenzy in the toy world and that the artists that design them get credit for their work.  Oh, an they released a pretty killer set of Star Wars figures that I would give your firstborn to own.  Now onto the news.
This is a cool little Valentine's Day release.  The figure is designed to look like a box of chocolates and comes in a pretty nice packaging set up.  This is available now for $16.95 by clicking here. 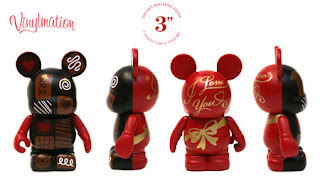