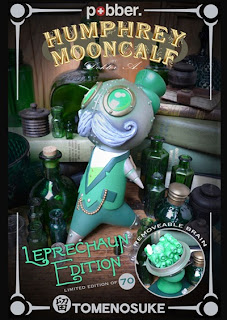 This may be the least scary Leprechaun I've ever seen.  He looks like he's ready for a good night on the town, maybe he'll take in a local production of Les Mis, or dine on a gourmet meal while firming up his plans to run for mayor.  Thank God he doesn't look like that creepy little man that was in the Leprechaun horror films.  He set back the adorableness of little people with pots of gold by at least 100 years.
Humphrey Mooncalf is of course the creation of Dr. A and Pobber Toys, who have released several other editions of this figure in the past year.  This one is extremely limited with only 70 pieces made and will be available exclusively through Tomenosuke on January 8th.