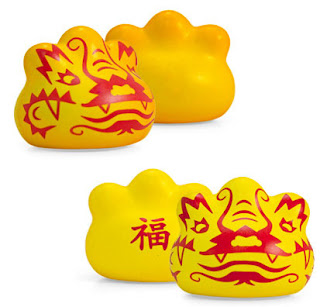 I went with my wife to a Chinese New Year celebration at a casino once.  It involved a room with vendors set up all around the perimeter (which is my favorite type of room) and a stage where various act would perform.  Being that I don't speak Chinese the talents of the comedians were lost on me, but I did quite enjoy the man and woman who sang various songs from Disney films. And the monk who did some pretty incredible Kung Fu.  It was a new experience to say the least, but if it was available in television form I would be addicted in a heart beat.  Screw American Idol, Chinese variety show is where its at!
So as you can see, I like Chinese New Year.  I like it a lot.  I like the fire crackers, the parades, the food, and now I like the toys!  Shawnimals has created these special pork dumplings to celebrate the year of the dragon.  There is only 60 of the gold and 60 of the yellow and they are blind boxed so whichever one you end up with is the one fate destined for you.  They're only $12 and available Monday, January 23rd at 1pm CDT by clicking here.   They will also be available through myplasticheart's website and in their New York store the day after. 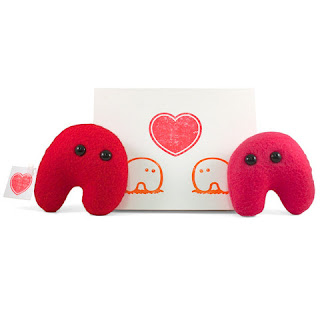 Now Shawnimals wouldn't leave you hanging for Valentine's Day would he?  Of course not!  Presenting the Buffalump plush and card set.  For only $20 you get two little plushies and a Valentine's card.  Only 50 pieces will be available and they are numbered on the tag.  Click here on Monday, January 23rd at 1pm CDT to claim yours.