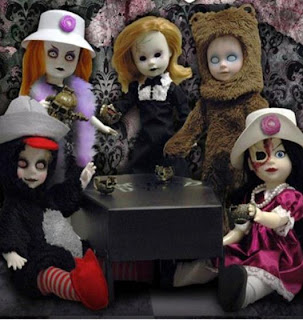 Children are kinda creepy little beings.  There I said it.  You knew you were thinking it.  Now that we're past that the people behind Living Dead Dolls have always felt that the little buggers could be even scarier than they are in the check out lane at the grocery store.  Presenting Series 23 of the popular little freaks.  Look at them, all having tea on someone's coffin.  I think real kids would do this, so that part isn't too alarming.  But look at their faces!!! The one in the middle with the black dress is kinda freaking me out, probably due to her lack of eyeballs.  She should form a support group with the girl in pink on the right, who obviously didn't listen to her well meaning parents and now has a horrible disfigurement to show for it.  I think that's what happens when you text at the dinner table after being told not to.
Posted by Chris at 5:00 AM