NECA makes some pretty cool toys at a ridiculously fast pace.  Every time I go to the store they have new stuff out that I haven't seen before and there's always a tons of different things.  Sometimes I think I've forgotten how to use the internet to see what's new, or that I have some massive head injury that I don't remember that causes me to lose track of toys that are coming out.  If the latter is the case, I must be having a symptom free day because I found out about these new releases before seeing them in Toys R Us.   First up is the Deadite Ash from Evil Dead 2.  Shockingly enough they are remaking the first one, which is a pretty typical Hollywood thing to do.  Here is my recreation of how that meeting went down.

Executive #1:  What older movies do people love that we haven't remade and completely ruined yet?

Executive #2:  Well, we screwed up Clash of the Titans already, how about Evil Dead?

What's most shocking to me is that Sam Raimi and Bruce Campbell are both on board with this remake.  And the role of Ash will actually be played by a girl!  I don't know why this is happening, it kinda has the whole "tinkering with Star Wars" vibe that has irritated me for years.  Stephen King doesn't rewrite his books, so people should stop changing their films. 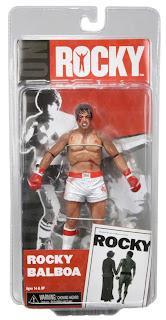 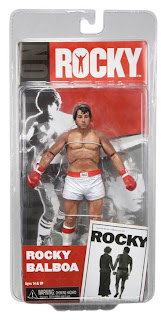 You will also be able to pick up figures from Rocky next month.  Both Rocky and Apollo will come in regular and "just got my teeth knocked down my throat" versions.  My only Rocky related story is that I live fairly close to Philadelphia and am  huge Flyers fan.  After every game at the exit to the parking lot there is a man that plays the Rocky theme on his trumpet over and over again.  It doesn't matter whether we won or lost or whether its below freezing and snowing, he is always there and always playing that song.  It's kinda weird, but it's also something that is a testament to just how unique the city is and just how important that movie is to it.  It's also a testament to the fact that he probably only knows that one song.