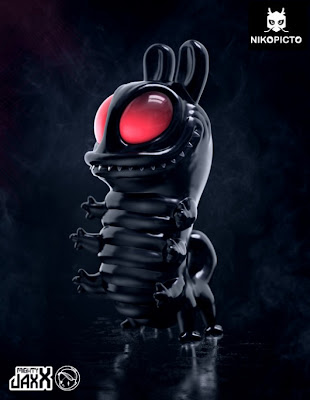 Anyone that begins a creative endeavor wants nothing more than for it to reach as many people as possible.  Whether you're writing a book or making a toy, you have to find a way to reach whomever your core audience is and then hope that it branches out from there.  Mighty Jaxx have released some pretty ambitious and very creative toys in the small amount of time they have been a company and now they need your help to allow them to get bigger and dominate the world!!!  Or something.

They've started a Kickstarer-like campaign on their website to help raise money to move to a larger facility.  By backing them in various amounts you get various rewards; from t-shirts and stickers to toys and even a trip to visit them in Asia.

Starting at $55 you can get that maniacal Hug the Killer figure you see up there.  I don't feel alice would have sought the help of a caterpillar such as that, but he would look good on your toy shelf.

For $200 you could snag yourself one of these glow-in-the-dark Bad Apple figures.  Only 30 of these will ever be made and they're exclusive to this fundraiser. 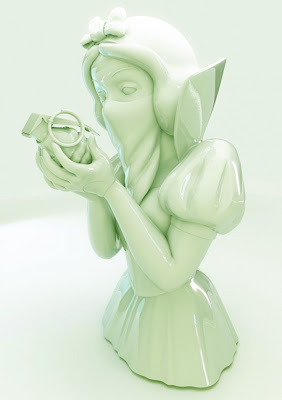 I really like these guys, especially since their toys lean much more towards art than something you would have played with in your sand box as a kid.  This Snow White figure is one of the most amazing things I've seen in quite awhile and I could picture this being part of a museum's collection.  Help these guys out by going to http://mightyjaxx.com/.