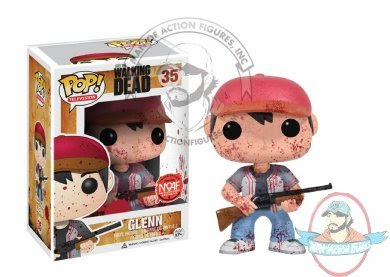 Anyone who watches The Walking Dead knows Glenn has had it rough.  For the first two seasons he was stuck doing all the crappy jobs because he was too much of a wuss to say no.  Then that hot girl took an interest in him and he's like "I have a reason to live" so he started acting more like a man and refused to ever be dangled in a well as zombie bait ever again.  Good on you Glenn.

This Pop! Vinyl figure from Funko is a special blood-soaked variant that is an exclusive for Man of Action Figures.  They're 1500 of them available to preorder right now for $14.95 and they will come out in April.   Maybe Funko will make me an exclusive Mickey Mouse covered in blood.  That would be pretty cool.
Posted by Chris at 5:45 AM