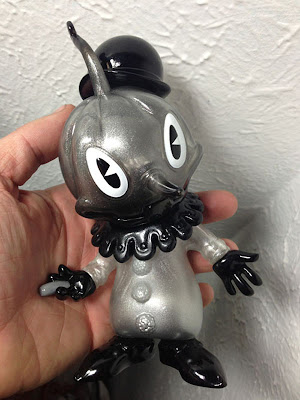 This guy will kill you in your sleep.  There is no doubt in my mind that he is filled with bad intentions.  Evidently this picture was taken after he cleaned himself up from some crazy murder spree, hence the lack of DNA evidence.  See, those  Insane Clown Posse morons think that they're frightening (which they are, because every time I see one of their equally stupid fans I know exactly where my tax dollars are going and it scares me that we don't just put them to sleep) but this is legitimate horror film level spooky.

His name is Stingy Jack (stingy because he likes to hoard the souls of children all for himself?) and he is the creation of Brandt Peters.  Don't for a minute think that I don't like this guy, because his creepiness is was makes him appealing.  This guy will be available for preorder January 4th for those of you lucky enough to attend Mr. Peter's art show at Stranger Factory.  For the rest of us, we have to wait until later in the month to get a crack at this guy.
Posted by Chris at 1:00 AM