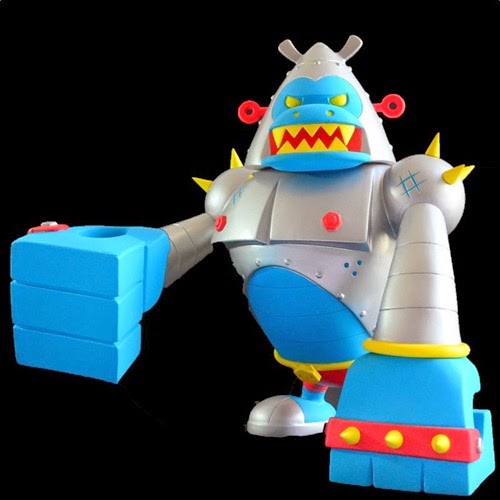 I just watched Pacific Rim the other day and I really enjoyed it.  Lots of good action, the CGI was impressive, and I didn't fall asleep even once.  The one thing about it that was really freaky was that the kaiju would take these massive poops and entire cities would be contaminated.  That was the real threat if you ask me.  Sure they may stomp you to death, or spit acid all over your apartment building, but who wants to die from a giant turd?  And how in the hell are you going to clean something up the size of Madison Square Garden when everyone is out building a stupid fence trying to keep these dudes out?  The answer, my friends, is in front of us.

Not only would giant robot monkeys be pretty awesome at clobbering otherworldly monsters, but they are world class poo throwers.  I've been to the zoo, I've seen it.  So the monkeys could use the kaiju's own waste material against it like some bacteria-ridden snow ball fight.  Ok, the more I've thought about this the more I realize this is a gross and terrible idea.  Forget I said anything.

Kronk x Pobber Toys will be unleashing their own mecha monkey this Friday.  And this is one giant piece of plastic.  You might have to reinforce your toy shelf so he doesn't collapse it.  So first make a trip to the Home Depot and get some extra shelf brackets, then log onto www.pobber.com and get yourself one of these.