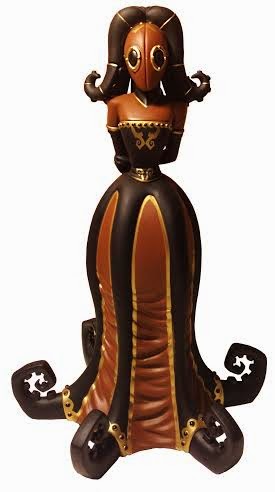 As I am writing this post I am playing fetch with my cat Jorah.  He has this little mouse toy that we call Chew Jackman and he'll drop it then push it towards you when he wants you to throw it.  It's kind of weird for a cat to want to play fetch, but what's weirder is that we never taught him to do this.   He brought it to me when I was trying to sleep one morning and I threw it out of the bedroom hoping he would go behave himself and stop tormenting me (he's famous for practicing Civil War medicine on my wife and I when we are our most vulnerable) and instead he brought it back.  This continued until I wore him out and he decided a nap was in order.  Now I'm having to chuck this thing at an angle so it makes it down the stairs and I have time to type.

On a completely different note, here is the latest version of Doktor A's Bella Delamere figure from Arts Unknown.  "The Unwound Automaton" will be going on sale today exclusively from Mintyfresh at 9pm Amsterdam time (which would be 3pm in New York and 12pm in LA in case you were wondering).  Who doesn't love a woman with tentacles?