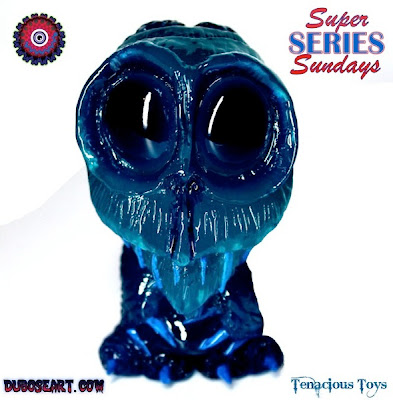 So Tenacious Toys has this new thing they're doing called Super Series Sundays in which they will release a limited edition resin or custom series every Sunday night.  So now you have something to do right after The Walking Dead rather than watching that dreadful Talking Dead show where they get people to blabber on about what you just saw.  Who cares.  Kevin Smith was on it last week wearing his stupid hockey jersey like he always is.  Do you think he owns 70 of those things or that he just makes his man servant wash the same one every day?

Back to business.  The first in this series is Species 246 by DuBose Art.  Only 10 of these were made in this exclusive color and will be available starting at 10pm this Sunday for $35 from www.tenacioustoys.com.
Posted by Chris at 6:05 AM