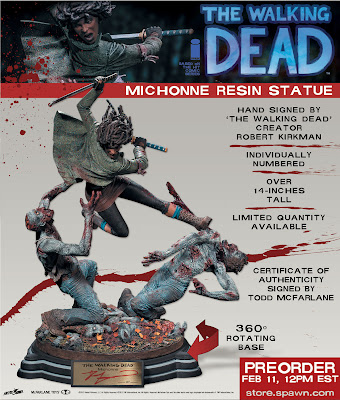 So The Walking Dead comes back on tv pretty soon, which is good because the whole spilt season thing drives me insane.  I've been spoiled by Netflix and DVD box sets and am now used to watching entire seasons of shows in a matter of a few days.  So waiting a week between episodes, let alone a few months, makes me a bit twitchy.

This statue from McFarlane Toys is based on the character designs from the comics rather than the show.  It's pretty cool and the picture will sell it to you better than I could.  You can preorder this sucker February 11th for $295 which includes shipping in Canada and the U.S.
Posted by Chris at 5:51 AM