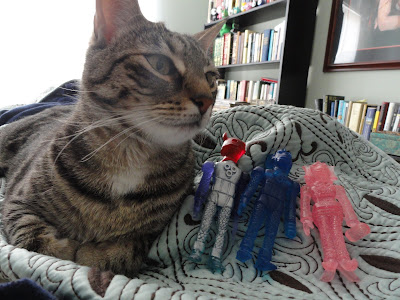 This is Ophelia.  Ophelia is laying in the bed that I paid a lot of money for and she claimed the moment we brought it home.  She won't let any of the other cats sleep on it and she wakes us up constantly throughout the night in an attempt to make us leave too.  It's a king size bed that according to her only has room for one 13 pound feline.  She has now taken this approach to our toys as well.  As soon as I opened a box I received from Monster Pants containing these Sea-Borg resin figures she claimed each one for herself and they have now become part of her hoarded objects.  I was able to catch a rare glimpse of them as she was creating a pretty involved story line that involved murder, love, and betrayal.  Basically, she was just reenacting what she sees on Sons of Anarchy.

James Felix McKenney created the Sea-Borgs from scratch.  Usually he can be found making pretty insane movies, but the lure of having complete control over something you create was too much to pass up.  His buddy the Sucklord taught him some secrets and the rest is action figure history.

What I like about these guys is that they are something I would have gone crazy for as a kid.  I would have harassed my mom for an eternity to buy me these things and then I would have gone outside and played with them in the first puddle I could find.  And it's not that I would be ashamed to be in my thirties and outside playing with toys.  It's that I don't want to share!  Get your own Sea-Borgs by going to http://www.monsterpants.net/. 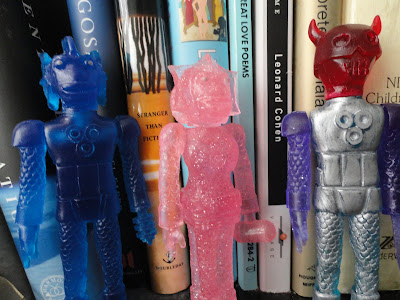