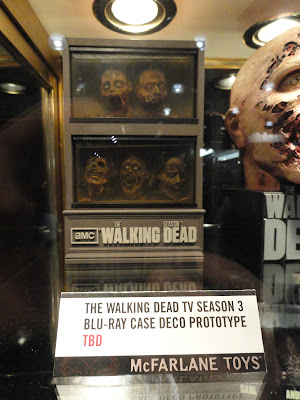 Stopping by the Mcfarlane Toys booth at Toy Fair one thing was made quite evident:  it's all about The Walking Dead.  Just look at the prototype for the Season 3 Blu-Ray set.  It's a reproduction of the Governor's tanks full of heads.  All you have to do is add water to it and the heads and various other bits and pieces float all around.  I don't even care about the discs, I just want the case!  They also had all of the newest action figures from the series but nothing compared to this: 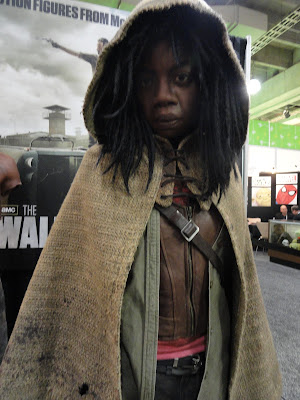 It's a life-size Michonne statue!  She had one of her pet zombies attached to a chain and the other chain was open so you could stick your head through it and take pictures.  I'm sure this will crop up at every convention they're at from now on, which is good cause they were still putting it together when I was there.  I know, it sucks that I didn't get what would have been the best Christmas card photo ever, but what can you do. 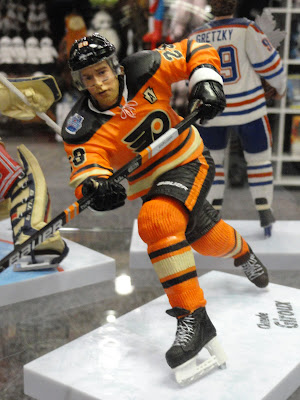 They are still heavily focused on their sports lines too, which is cool but not really my thing.  I did however take a picture of Claude Giroux cause I love the Flyers.  Gretzky is lucky he's a legend or I'd be pissed he was in the background trying to ruin my shot. 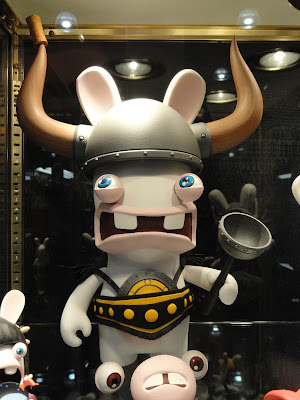 I also felt obliged to take a picture of this dude in his sweet viking get up.  But these aren't the only pictures I took.  If I put them all on here you would have to scroll for a decade, so check out more Toy Fair pics at www.facebook.com/thetoyviking and on Instagram @thetoyviking.
Posted by Chris at 10:58 AM