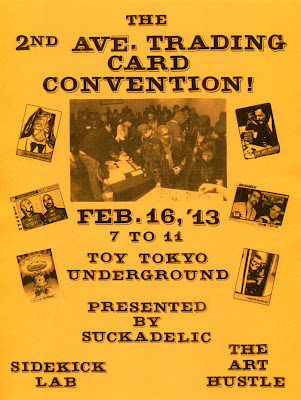 You know what was the best?  When they used to have baseball card shows in the mall.  You'd be minding your business, just looking to get some new pants and BAM there's like 200 tables full of stuff that you just have to look at.  And there would always be the one table that didn't sell baseball cards, but instead sold posters and band patches and stuff like that.  And you thought that dude was living the American dream, traveling all over the place like some newfangled mall gypsy.  Then it turns out he was actually wanted for double homicide in Toledo and was just selling stuff he stole from Spencer's to try and buy himself good legal representation.

Like many things from my childhood, card shows have pretty much all but gone away.  Which is why this event tomorrow is so cool.  If you're in the New York area you should hit up Toy Tokyo Underground for the 2nd Avenue Trading Card Convention.  It's being put on by Sidekick Labs who make those cool Art Hustle card series.  It just so happens that series 3 has been released and you can pick that up along with all kinds of other card sets that will blow your mind.  You can also meet The Sucklord, Lamour Supreme, and Buff Monster and get them to draw you pictures, or something.  Sounds lek a good time to me!
Posted by Chris at 5:49 AM