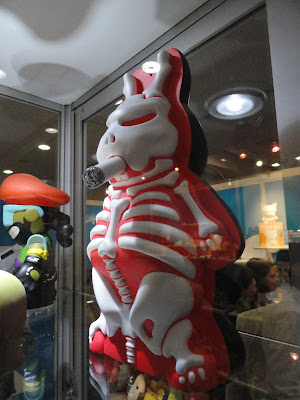 I made my first trek up to Toy Fair in New York yesterday not really knowing what to expect.  Many of the booths didn't reveal a lot that you couldn't already find on the internet to begin with.  So I was kinda bummed about that until we stumbled upon Kidrobot.  I didn't even know they were going to be there, so that in itself was a pleasant surprise, but then I saw the awesome stuff they had in their cases and was ready to hand over my credit card information on the spot.

The first picture you see up top there has caused quite a stir on my Instagram.   It's a huge, upright Smorkin' Labbit from Frank Kozik.  If I remember correctly it should come out around May and will be available in two different color schemes.  This is a must buy for me. 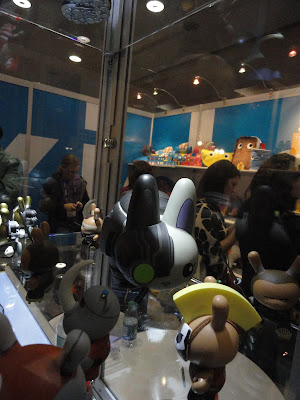 The other big reveal that I was able to get a picture of was of this second color way of the Frank Kozik and Chuckboy Cyborg Labbit.  The first one was released at San Diego Comic Con and has since been one of those holy grail pieces for me.  Thankfully,  this guy is set to have a much wider release in March so hopefully I'll be able to snag one there.  You can also see he is surrounded by Huck Gee's new Post Apocalypse Dunny Series.  These guys are sicker in person and made me even more excited for their release.

I was able to get a complete tour of the booth from their sales manager and got to meet their head artist as well.  We seriously talked forever about toys, the business of toys, and a collaboration this Summer that will blow your minds.  They involve Labbits and Munnys and something you would never expect but will want to own every one of.  They only had a mock up of those available and no actual samples, but it's going to be huge for both Kidrobot and collectors.  I'm sure someone will leak the information, but I didn't have permission to do that so I don't want to be that guy.

They are also continuing the Street Fighter, South Park, and Futurama lines and they will include not only blind boxes, but bigger figures also.  Again, there were no samples, but the mock ups looked pretty cool.

Toy Fair is really geared more towards people with stores that will spend a ton of money buying product, so the fact that everyone was so nice and excited to talk to me really blew me away.  I have a newfound respect for the entire company and the insight into their business was really interesting. 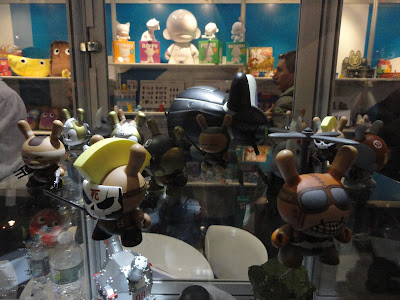 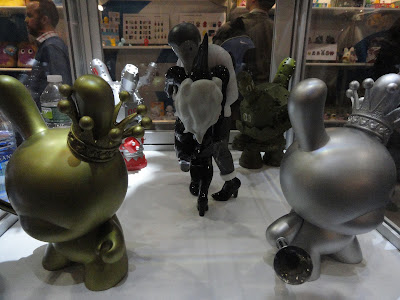