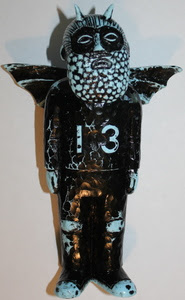 I'd like to think that all of the crazy artifacts we've found in Egypt were just their versions of collectibles.  All of their gods were just characters in an ongoing narrative, like Batman or something, and the statues and trinkets were just their way of merchandising.  I picture kids lined up to snag the new exclusive Anubis stone figure at the Nile Comic Convention.  Then we come along much later and get it all wrong, thinking they actually worshipped these characters as deities.  Maybe one day someone will dig through our rubble and determine that we worshipped Hello Kitty based on all of the products that will no doubt survive any natural or man made disaster.

This Lucky figure from Mike Egan kind of has a folk art/artifact look to it.  Like it was found in a swamp in Louisiana and whoever posses it will be tormented by ancient souls.  This version was cast in a light blue plastic and painted black giving it that aforementioned spooky look.  Yes, it may contain the spirit of a long dead shaman, but it will still look really cool on your shelf.  Only 25 were made and they are on sale right now at http://mikeegan.bigcartel.com/.