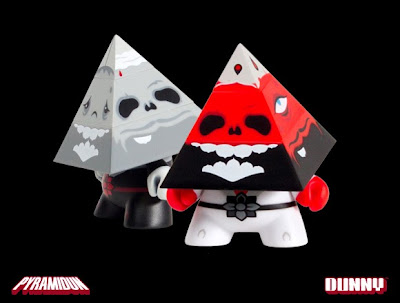 This toy has gotten a lot of panties in wads.  Andrew Bell has re imagined Kidrobot's Dunny with a pyramid head.  What's cool about this is that the pyramid has three sections that spin, giving you the opportunity to create the face you like the best.  Yeah, I kinda miss the traditional Dunny ears, but I don't know how on earth they would have added them in and still given you free reign over the face you make with it.  At the end of the day it does take some getting used to with the different head shape but the interactive part of it outweighs that for me.  And the great thing is that they aren't blind boxed, so you can easily get the color scheme you want or you can get them both without having to spend a lot of money or end up with doubles.  They come out on August 15th and will sell for $14.99 each.
Posted by Chris at 11:34 AM