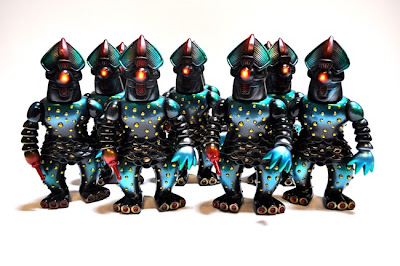 Cop A Squat Toys has the best company name in the history of business.  Skinner is the best figure painter in the history of art toy thingys.  When you combine their magical powers the result is so hot it may burn a hole in your toy shelf, so you should probably buy one of those fire retardant blankets to put underneath him just to be safe.

He painted up 10 of these Semi-Korosiya figures using that special V-Color paint that all those mystical toy makers in Asia use.  But not only do you get the toy, that would be too simple.  You also get an amazing print to go with it: 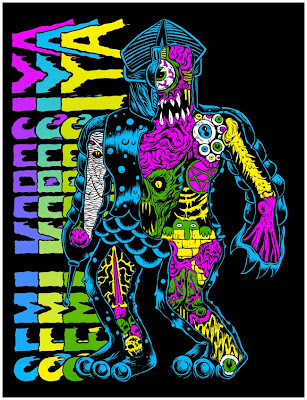 Look at this!!!! This guy has all kinds of craziness going on inside of him.  This is exactly what happens to my innards if I accidently eat cheese.  Especially the part with the sword and the lightning.

And the header card on this thing is pretty sick to.  Most of the time people just staple old Chinese food menus or whatever else they have laying around the house to make a header card.  Not this time.  More work went into this header card than a Miley Cyrus twerking video.  You may even want to frame it too and create an entire shrine in your house for this toy.  No one would blame you.

Now you're probably asking yourself "How much will all of this cost me?"  Well you may expect to pay thousands for a package this chock full of goodness.  But Skinner is a man that understands the economy and the fact that if you can't pay your electric bill then that's a huge chunk of the day you can't gaze into the all seeing eye of this toy.  So you get the toy, the print, the killer header card (trust me its cool), and the Ken Griffey Jr. rookie card (not really) for...$225!!!!!!!!

Now you're probably asking yourself "But how do I get in on this sweet deal?"  Well I'm gonna tell you Uncle Slappy.  You gotta be at your computer and ready to make the magic happen this Thursday, August 29th, at noon Pacific.  Set your coordinates for http://shopcriticalhit.com/products/semi-korosiyra and pray that lady luck is on your side.

For those of you that didn't get the Ken Griffey Jr. rookie card joke I present to you Mr. Don West, the king of late night baseball card deals. This man is a source of endless entertainment and has probably had a dozen strokes from yelling like a mad man.