Moving Sale from We Become Monsters 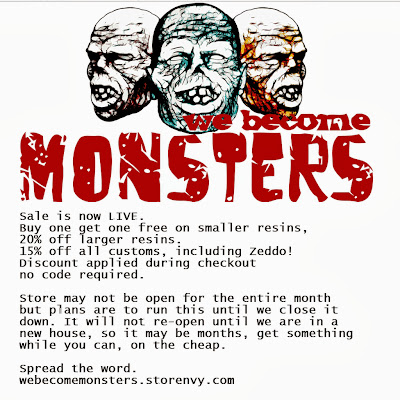 Moving sucks.  I hate doing it.  The last time we moved we got our mattress stuck on the stairs trying to get it to the second floor.  We tried everything to move that sucker, and I even bought ratchet straps and folded it up like a taco.  After about an hour of trying to move it we just decided that sleeping on the stairs at a weird angle probably wouldn't be the worst thing in the world.  Then something came over me.  Maybe it was the "eye of the tiger" or the fact that we had to get the U-Haul back before they charged us more money, but I got underneath it and just bulldozed that S.O.B. up the steps and into the bedroom.  That would have been a good moment to die in my wife's arms, my last wish only for her to sleep in comfort.  I could have been a legend.

So help We Become Monsters lighten his load, cause there is nothing about moving that is cool.