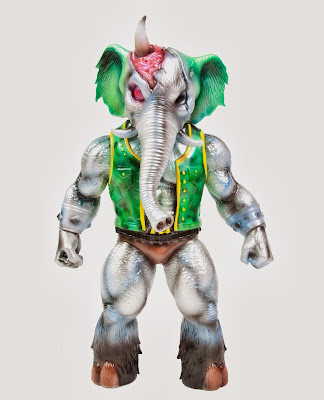 Oh snap son!!!!!  Did you miss out on your first crack at sweet wrasslin action when Skinner and Unbox Industries released Bullet Belt?  Well, unlike my Uncle Ted and his plight with the criminal justice system, you're gonna get a second chance.   On a side note, just cause they find a semi automatic weapon in the trunk of your car doesn't mean you can't act surprised about it and plead ignorance till your lawyer gets there.  Uncle Ted has no poker face.

This is a most special Mishka edition of Bullet Belt known as Doom Belt!!!!!!!!!   Lamour Supreme created the paint scheme and you can pre order one of these beauties now.  I know what you're thinking: "but Chris, the weather is getting cold and I gotta save up for my heating bill."  Bull crap you do, cause Bullet Belt will keep you warm at night.  Just tuck him under the covers with you and let his awesomeness roast you like a Thanksgiving turkey.  And you don't have to grocery shop either, cause Bullet Belt will hunt all of your food for you with his bare fists.  I hope you like the taste of wild critters.  And you get a little Mini Bullet Belt to take with you to work, so he can get you that raise you deserve and stop other people from using your "World's Best Cat Dad" coffee mug.  It wouldn't be so bad if they would just wash it afterwards, cause you don't know where there filthy lips have been.  Mini Bullet Belt isn't gonna let you take that crap anymore and will leap from your pocket to throttle the offending party.

I know what you're thinking now: "Chris, you've convinced me to open my heart and accept Bullet Belt as my personal protector/lover, so how do I get one."  Well, I'm gonna tell you.  You gotta pay a visit to http://store.unboxindustries.info/ and preorder one, cause these bad boys are being painted to order.  So if you don't order one now, you'll never be able to get one later when you've finally come to your senses.  And you only have until October 31st to pull the trigger on this bad boy so get to it.

Bullet Belt is part of the Triclops B.A.S.T.A.R.D. universe, punk.