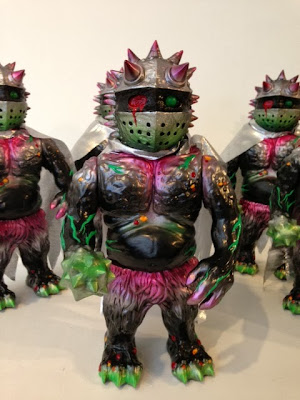 Well, New York Comic Con this year is gonna involve me visiting one booth, then standing outside the rest of the time begging for change so I can afford to get home with all my treasures.  Skinner sent me these images last night of the craziness that he will be releasing and I immediately called up my mortgage company and told them to suck it cause I won't be able to send them anymore money for a long time until my drug business gets off the ground which takes some time because you got to get that primo product and then build a clientele and you gotta get some people that are willing to get their hands dirty but won't rat you out when the idea of prison snuggles are brought up and I need some time to establish that I'm crazy enough to mess you up if you try and take down my soon to be empire.  All of that takes time and money and I'm not gonna have any money after buying all these toys to line up in my new crime office.

Let's get to the important details before I black out from all the awesomeness I see and have to go to the emergency room.  First up, a run of 5 Mutant Vinyl Hardcore Berserkers.  These will be available Saturday at 2pm for $300 each. 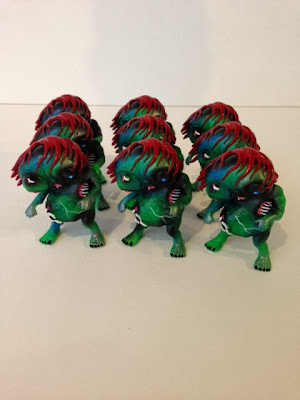 These are called Not Child Prostitute/Not Bootleg.  I'm pretty sure I've seen them outside of the casinos in Atlantic City late at night.  You just have to look for the ring of seagulls circling their heads.  They're made of resin, are available Friday at noon, limited to 10 pieces, and cost $100 each. 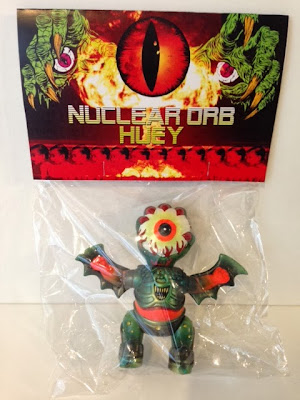 It's like a baby Eye of Sauron or something.  For those of you keeping score at home, that's the second time I've referenced the Eye of Sauron this week.  I'm becoming so predictable.  These will be available Friday at 2pm for $200 each.  Only 6 were made. 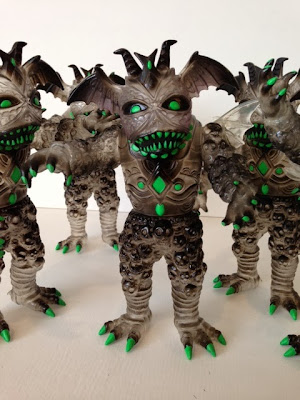 Now this is what I want.  Ok, let's be honest with ourselves here, I want them all.  But if I had to pick one, and I will or my wife will kill me for my lack of fiscal responsibility (she doesn't believe in my crime lord dreams) then this is the one I want.  The Unhallowed Ultrus Bog is limited to 5 pieces and will command a price of $150 when it is available on Sunday at 1pm. 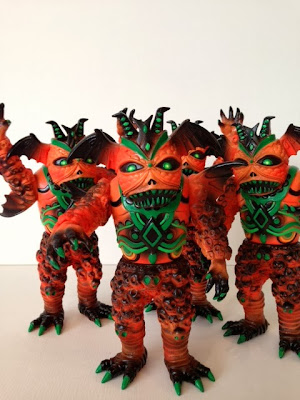 Another Ultrus Bog?  Yeah sucka, you heard me.  It's the Great Pumpkin version.  Charlie Brown would have peed his britches is this bro rose from the pumpkin patch.  Four were made and are $300 each when they appear Saturday at 3pm. 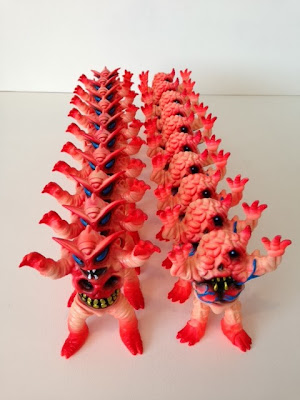 Now this is for all you coupon clipping bargain shoppers out there.  You get not one but two Abyss Minions painted by the Skinman himself for the low low price of $100.  Only 10 sets are available though so don't waste your time taking pictures of girls dressed as half-naked comic book characters. 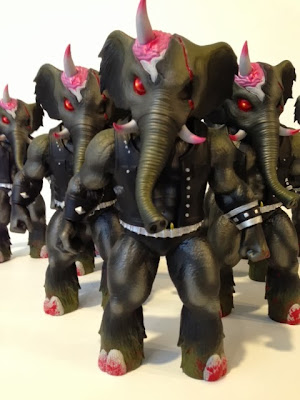 This toy will beat the living pee pee out of you and then become your step dad.  Bullet Belt! Bullet Belt!   Saturday at noon is the time, $300 is the price, and 10 is the amount that are up for grabs.  Oh, and you get all of the patches that Bullet Belt wears to put on your own jacket and be cool or something.

This isn't even everything, but my fingers are sore from typing so much.  There will also be t-shirts, balloon animals, and a special collaboration with Healeymade.  Booth #110 is the only one that needs to be on your mind if you're ready to cross over into madness.