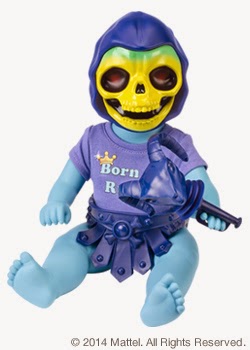 I take back everything I ever said about dudes playing with dolls.  Well, not all of it, but if the doll just happens to be an infant Skeletor, then by all means.  What can I even say about this that the pictures don't?  It's Skeletor and it's a baby doll.  And this isn't just some little figure that's in scale with the rest of the Masters of the Universe line, no no no, this is the size of something you would by your daughter and go AWWWWWWWWWWW every time she hugged it.  I almost want to have kids because of this toy.  And he comes with a toilet, so he can make his evil little poops and pees.  It really is the first throne any terrible ruler will have in life.

So I know you want this, if nothing more than to give as a gift to terrify some unsuspecting child.  Hopefully they won't be too hard to get, as it looks like they will be first made available to people who subscribe to the Masters of the Universe figure thingy that Mattel has.  Whatever's left will be available at this link on June 16th at 9am.  I may be late for work that day. 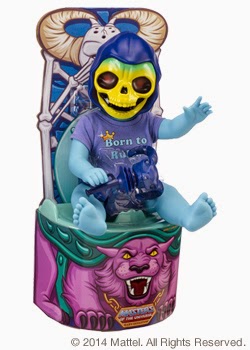 Email ThisBlogThis!Share to TwitterShare to FacebookShare to Pinterest
Labels: He-Man, Masters of the Universe, Mattel