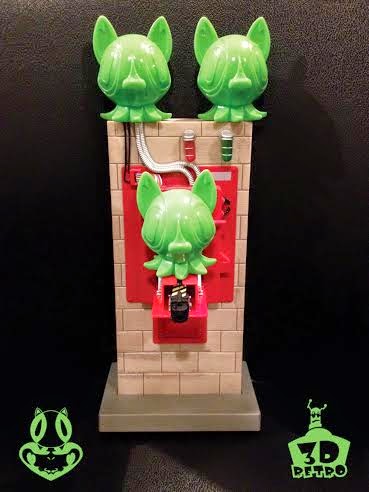 Sharon and I just watched Ghostbusters 2 on Netflix the other night and as a result would like to petition Rick Moranis to make more movies.  That dude is seriously funny, and he didn't have to rely on toilet humor like most comedians do these days.  That makes me sound kinda old, but I don't care, because I don't think it takes any talent to be crude.  Now get off my lawn before I call the cops!

In case you didn't know, this year marks the 30th anniversary of the original Ghostbusters film.  Do you remember the scene in the library where they irritate the lady ghost while she's reading and she gets all mad and transforms into a hideous creature?  That scared the crap out of me when I was little, so much so that each time I watched the movie I would turn away at that part.  I was also scared of Jaws, my own shadow, dirt, free range monkeys, the Dewey decimal system, and nursing homes to name a few, but that ghost ranked up there.  Lucky for me I outgrew most of those and have become a pillar of manliness that can look that scary lady in the eyes and know that she won't keep me up at night most times.

The best way to celebrate any milestone in life is to buy toys, so lucky for you Nathan Hamill and 3DRetro have created an Octopup to mark this occasion.  He looks like he was molded from the same wad of goo that the ever popular Slimer was, and he will be available to haunt your halls beginning this Sunday, June 8th, at noon Pacific time from http://www.3dretro.com/.

And I'm still serious about Rick Moranis making more films.  Lets get a Kickstarter going to make Spaceballs 2 happen.
Posted by Chris at 6:02 AM