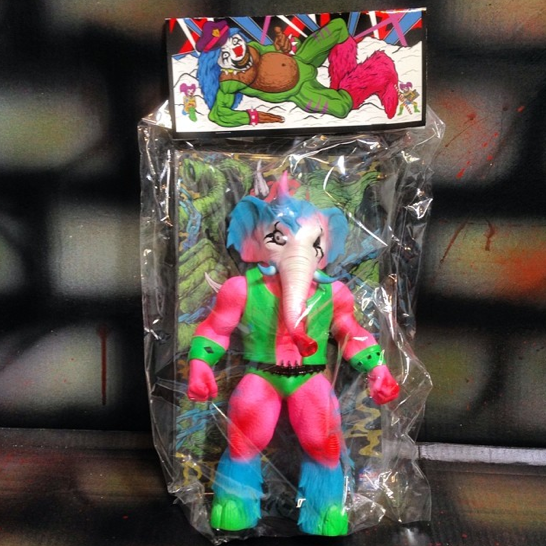 Dr. Rockso is the perfect role model for kids because he's honest.  The Rock and Roll Clown is very forthcoming about his love for all illegal substances, so they don't have to be disappointed when he gets caught in some tangled web of lies.  He's not some guy you think is an awesome athlete only to find out later that he drinks the blood of infants to up his goal scoring ability.  He's not some movie star, worshipping aliens and smacking hookers around while pretending to be a good family man.  Nope, ol' Dr. Rockso is a drug fueled circus clown with a penchant for sweet hair metal riffs and if you don't like that then you can go stand back on your pedestal of judgement and boredom.  Plus the guy is decked out in sweet neon spandex, and I don't know anyone who isn't a fan of that.

Bullet Belt is looking snazzy as hell in this day glo color scheme.  Skinner painted 5 of these and he's putting em up for sale tomorrow, January 20th, for $150 each.  And let me tell you something right now, that's a better deal than you even know.  Unbox Industries did an amazing job on these figures and they're freakin huge and anything Skinner paints is gonna melt your little eye balls from your little skull when you gaze upon it in person.  Buying one of these will be the best decision you've made all year.