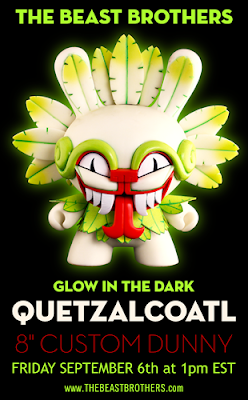 Ahhhhh if only I was in charge of making toy decisions.  I'm not mind you, but it's not for a lack of trying.  I've got my fair share of opinions, sometimes negative, sometimes not.  Most of the negative opinions I never share because I feel it would be a waste of time for me to type about things that I think are dumb.  Believe me, it would take awhile.  What I like to instead do is focus on the stuff I really like and just let everyone else blow smoke up your butt about how awesome something is when we all know it sucks.  That being said, if I were in charge of making toy decisions this would be an actual production Dunny.  The colors, the sculpted pieces, everything is spot on.  You can't tell me people wouldn't go nuts to own one of these.  I would call you a lying liar whose pants are indeed on fire, cause this guy is sick.

The Beast Brothers aren't in the business of waiting around for someone else to realize how cool this would be, so they just made it themselves.  This is of course based on their 3 inch Dunny that was an actual production release, but this sucker should have been made huge from the get go.  Starting tomorrow, September 6th, you have 24 hours to order one of these.  However many are ordered are however many they shall make by hand.  And it even comes in a laser engraved box, which is pretty cool.  Order yours from http://www.thebeastbrothers.com/.