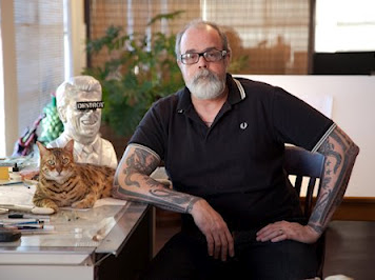 The man, the myth, the cat lover Frank Kozik will be doing a signing tour at Kidrobot locations to celebrate the release of the new Marvel Labbit mini figures.  I don't think he'll be bringing his little buddy Eddie that you see there, mostly because Kidrobot can't afford his dressing room requirements:

-  He will only drink water that has been collected from melting polar ice caps.  Try and substitute      Aquafina and he'll cut your face off and wear it for Halloween.

-  His litter box needs to be filled with shredded currency from any country the United States is currently invading.  Canadian will work in times of peace.

-   All of his groupies need to be checked for fleas and sign extensive waivers absolving him of any legal matters that may arise from, and I quote, "how he likes to get down."

But Frank will be there and word on the street is that there might be some kind of cool poster involved in these appearances that everyone is gonna want and probably not save one for me.  That's cool, its not like I have a huge hole in my wall where I keep all of my guns/blackmail material that could use a good covering up.

Here is where you can meet Mr. Kozik: