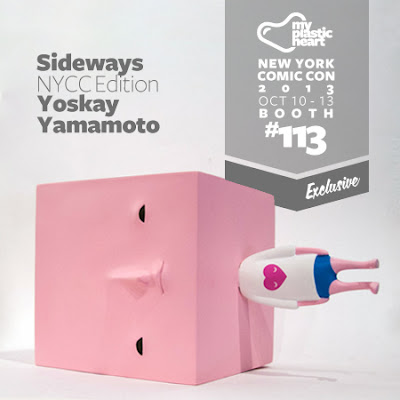 Thank God people are starting to release exclusive info for New York Comic Con.  I like to develop a game plan early on to determine the things I have to have and the longer I have to desire it, the more likely I am to take extreme measures to ensure I get it.  Will I push a kid out of the way?  Maybe.  Hey, what's the point of being bigger than them if you can't knock em over.  Ok, I wouldn't really do that...unless no one was looking, cause who's gonna believe some kid over me?

myplasticheart always have a ton of exclusive offerings every year and these are but the first two that they've allowed us to see.  The first is this Sideways bro from Yoskay Yamamoto x Mighty Jaxx.  They're really turning the idea of the designer toy on it's head (see, this is why Abraham Lincoln called me, and I quote, "The comic genius of our time".  It's on Wikipedia, so it must be true.)  He looks pretty calm and collected for not being able to pick his head up off the ground.  Only 100 pieces were mae and it will be $85 throughout the convention. 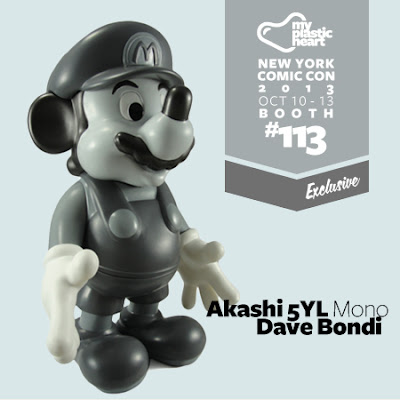 This next guy from Dave Bondi is looking all sorts of familiar.  It's like a couple of well known characters met on Match.Com, had a nice evening out, things got crazy, and nine months later this is the permanent reminder of their first date.  Fifty of these were made and they will cost $65 each.  Both artists will also be in attendance sometime during the con to sign your figures/give you high fives.