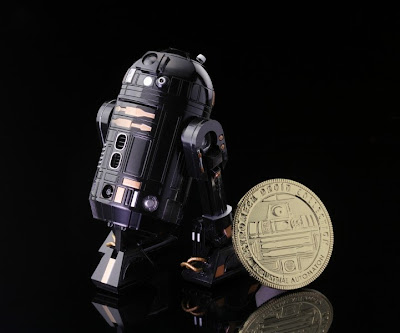 Every family has that one person who was just born bad.  Most of the time that just involves someone making dumb choices that result in the police coming by every once in awhile.  Rarely does that involve trying to help the Galactic Empire defeat the Rebel Alliance and bring a reign of terror over the entire galaxy.

R2-D2 will have to think twice about inviting his evil cousin R2-Q5 to Thanksgiving, cause he'll probably steal.  This droid is an exclusive release from Kotobukiya for New York Comic Con, though their will be some available for preorder through their website.  The ones bought at the con will come with this gold plated medallion as an extra special bonus.  Check em out at booth #1654.
Posted by Chris at 6:54 AM