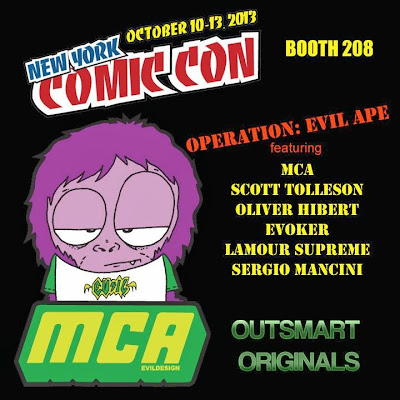 Did you ever notice that it's cool to put designs on shirts but not on pants?  Like, if you have pants with a design on it you are pretty much a deviant who listens to Insane Clown Posse and has a low credit score.  Think about it, when was the last time you saw anyone who didn't look like a drunken mugshot wearing pants with a design up the leg?  We have made it unacceptable in our society to express your artistic desires on your dungarees and I'm ok with that.  If Project Runway has taught me anything it's that you gotta edit.  Less is more.  Your jeans are the pallet cleanser between your t-shirt and your sneakers, a brief reprieve of visual assault from those that are checking out your hot bod.

Outsmart Originals doesn't make artists series pants thankfully, or they would be in trouble.  They stick to tees and have a load of them coming to New York Comic Con.  MCA has collaborated with some of his artist bros to transform his Evil Ape character.  Lamour Supreme, Sergio Mancini, Scott Tolleson, Oliver Hibert, and Evoker are all putting their spin on the iconic little dude.  And Outsmart will also have a shirt from Frank Kozik that features a Day of The Dead kitty!!!!!!I haven't even seen it yet but I'll probably buy it anyway, cause that's how I roll son.

Can't make it to New York next month?  You can preorder them all right now at http://outsmartoriginals.storenvy.com/.
Posted by Chris at 1:00 AM