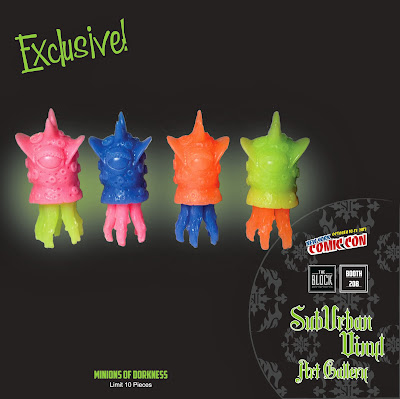 These guys remind me of a show I watched on Discovery Channel about the Humboldt Squid that are freakin huge and will literally kill you.  People fall into the water sometimes when they're fishing at night and the squid get all happy cause it's like "hey free fish"  then they decided to taste the fishermen and they were like "hey, not too bad" so they eat them too.  They're also known as diablo rojo and I make it a point to not mess with anything with diablo in its name.  The fact that I'm not dead proves that this is a sound philosophy.  Respect the science.

You wanna see more New York Comic Con exclusives?  (if you pretend that Paul Stanley from Kiss is asking that to a crowd it sounds really cool)  Well, how about some more stuff that Suburban Vinyl is gonna bring with them?  Like these Minions of Dorkness from Scott Kinnebrew (aka Forces of Dorkness).  There's a total of twelve sets of each style of these tentacled bros and they're held together with magnets, so you can swap heads all day long.  They're gonna be $30 each and you can pick whichever ones you want; none of that blind box stuff here. 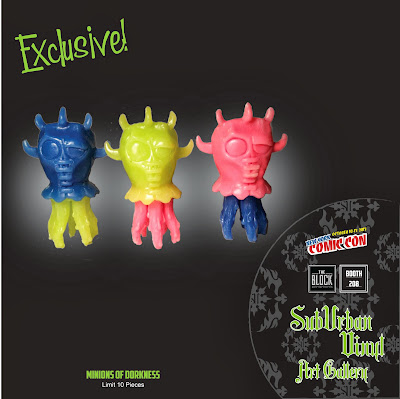 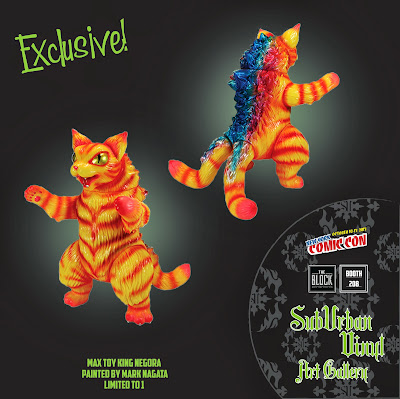 You may or may not know that I love cats.  I only talk about them so much that sometimes I wonder if its overboard.  Then I think screw that cause they're freakin adorable and do it anyway.  I believe the kids would call that YOLO or something.  I dunno, I'm old and cranky.  Mark Nagata from Max Toy Co. has created the most limited edition figure for the entire convention.  It could only be more limited if it didn't exist, cause he only made one of these bad boys.  That's right, there's only one.  And it's $175.  And if you buy him you have to hold him up to the sun like Simba from the Lion King and watch as every other collector's eyes get really wide with envy.  Get all this at more at booth #208.
Posted by Chris at 5:12 AM