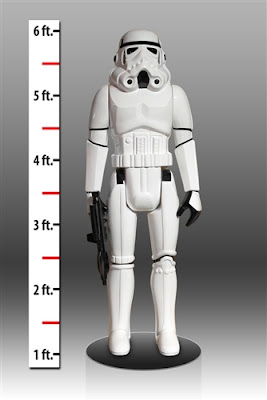 I know I say this a lot so maybe you don't think I mean it, but FOR THE LOVE OF GOD I WANT THIS!!!!!  Those crazy folks at Gentle Giant used some fancy space lasers to scan an original Star Wars Stormtrooper figure and reproduce it to be as tall as I am.  And it's articulated!!!!  Now, the only draw back is it's going to be much harder for me to play with in the sandbox and get dirt in his joints, but I'll eventually get over that.  To own one of these it will set you back $2,300, but I actually think that's kind of reasonable, especially since it ships for free in the continental US.  Expect my Kickstarter campaign to begin very soon, in which the only reward will be a picture of me with the Stormtrooper.  It will be like those feed the children things, where I'll send you a monthly email letting you know how he's doing.  I'll even let you vote on outfits that he can wear in the newsletter pics.  It's a win win.