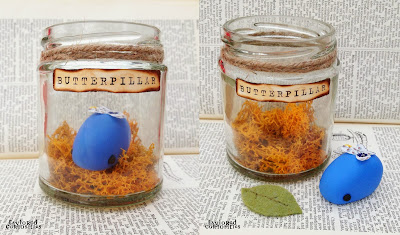 Who didn't collect bugs in jars as a kid?  It was free entertainment and pretty harmless unless you were out there catching Black Widows.  I was a bit too rational as a child though, so I only kept em for a few minutes and let them go again.  Sure I poked holes in the lid so they could breathe, but no one could explain to me what they were supposed to eat in there.  Do they have some sort of insect food delivery that goes into action when their brethren is imprisoned?  We didn't have the internet then, so if your parents didn't know things you were out of luck.  And the Encyclopedia Britannica would only get you so far, so I practiced catch and release.  It would be interesting to me if someone could pinpoint the moment that compassion left me and I became a cruel old hermit.  Get off my lawn!!!!!!!

Taylored Curiosities has taken us back to the innocence of childhood with these Butterpillars.  You can keep them in the jar as long as you want and never have to worry about their discomfort.  Poke a few holes just in case though.  They're on sale right now at http://tayloredcuriosities.bigcartel.com/.