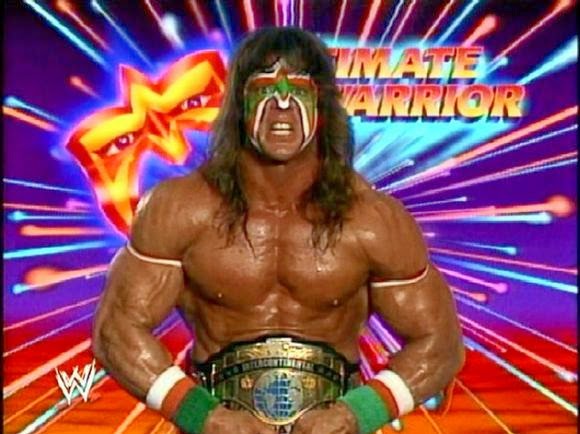 I've always loved professional wrestling.  Though there have been times when my interest fluctuated, I've always come back to this unique form of entertainment.  My grandfather got me into it and we spent a lot of time in front of the television, predicting who would win and arguing with the screen when things didn't go the way we thought they should.  Of course we knew it was scripted, but it felt so easy to suspend disbelief for those few hours a week.  My grandfather passed away last October and shortly after my wife and I started watching the WWE again with more interest.  It felt like being a kid again and sitting in his living room.  He took me to my first ever live event when I was five and I can remember being ringside and being awestruck at these larger than life characters who were more famous to me than anyone else in the world could possibly be.

One of my favorite wrestlers of all time was The Ultimate Warrior.  I spent a large part of my youth reading about him in magazines and glued to the television anytime WWE was aired.  He was something beyond human, like an evolution of man that had somehow skipped the rest of us.  Just a few days ago he made his return to television as part of Wrestlemania and later on RAW after being inducted into the WWE Hall of Fame.  And then he was gone.  The timing of his death is probably more shocking than his actual passing, as the years of punishing one's body usually doesn't usually lead to a healthy retirement.  But he got to thank everyone that grew up watching him, and we in turn got to thank him through the emotional responses he received this week.  If it had been a movie no one would have ever believed it could have ended that perfectly.  But real life will always be much stranger than anything we could ever conjure in our imaginations.  And another piece of my childhood, of many of our childhoods, is gone now forever.

Email ThisBlogThis!Share to TwitterShare to FacebookShare to Pinterest
Labels: WWE