Second Series of Sons of Anarchy Coins from Mezco Toys 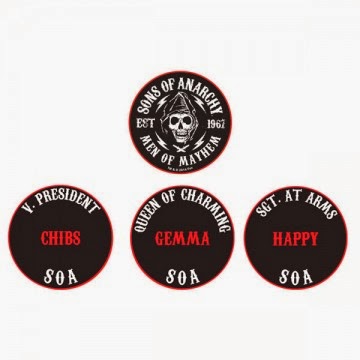 While the first series of Sons of Anarchy coins was to commemorate those characters that had succumbed to their vicious lifestyle, the second set features characters that are still, for now, with us.  But as the last season of the series is quickly approaching, their time in this world is most likely coming to an end.  I'm both excited and sad that my favorite show is coming to an end.  I'm excited to see how all of the insanity is wrapped up and how much further everything can spiral out of control before they reach any form of resolution.  But I am saddened that these characters that I've invited into my home for the past seven years will be gone forever.  You build an emotional investment in their fictional stories and it's hard to let that go.  I am grateful that the show will be allowed to go out on it's own terms and we will all get to see the completion of Kurt Sutter's vision the way he intended it.  Not a lot of programs get that ability.

I went a little off course there, but I'll try and right the ship.  These coins were produced by Mezco to go along with the actor's that portray these characters appearing at Chiller Theatre in Northern New Jersey April 25th-27th.  I haven't been to that convention in a few years and am seriously tempted to go, if for no other reason than to meet Katey Sagal who portrays Gemma.  She is by far one of the most complex characters on television and I can't imagine anyone else bringing so much life to that role.

You can only get these coins online by visiting http://www.mezcotoyz.com/.