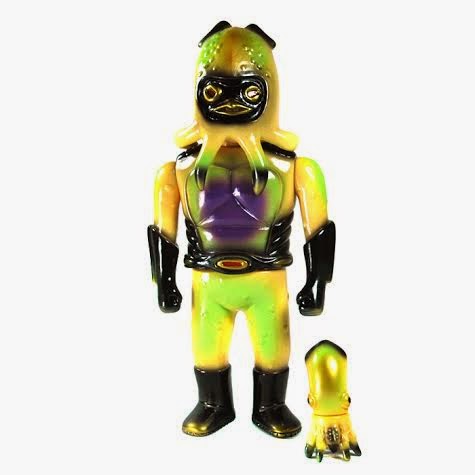 I'll admit it:  I'm a sucker for a good reality tv show.  Mostly I like the ones that are some sort of competition because I'm always hoping that at the end no one will win because the producers will be disgusted by how horrible all of the people are.  Seriously, it's like they're collecting names for the national douche bag registry when they cast for these things.  There's so many that my wife and I can never remember their proper names, so we just make up ones that are more fitting.  Tough Love, a show about people who can't find success in the dating word, becomes "Unlovables" and we hope that maybe a fire will break out in the house that that can't be tamed.  Are You the One, a dumb show about  idiots trying to figure out who their perfect matches were, became "Sticky House" for the careless amount of coupling that went on.  I could go on and on, but it would be embarrassing to let you know how much of this junk I've actually seen.

If I were in charge of naming toys, Yakimon's Takoshi would be renamed "Super Hyper Squid Face".  I just think it would be more fun to explain what it is to your friends if that's what it was called.  Regardless of his moniker, you can buy one this Friday at noon Pacific time when they go on sale from Toy Art Gallery.