Krampus on a Shelf from Forces of Dorkness x Tenacious Toys 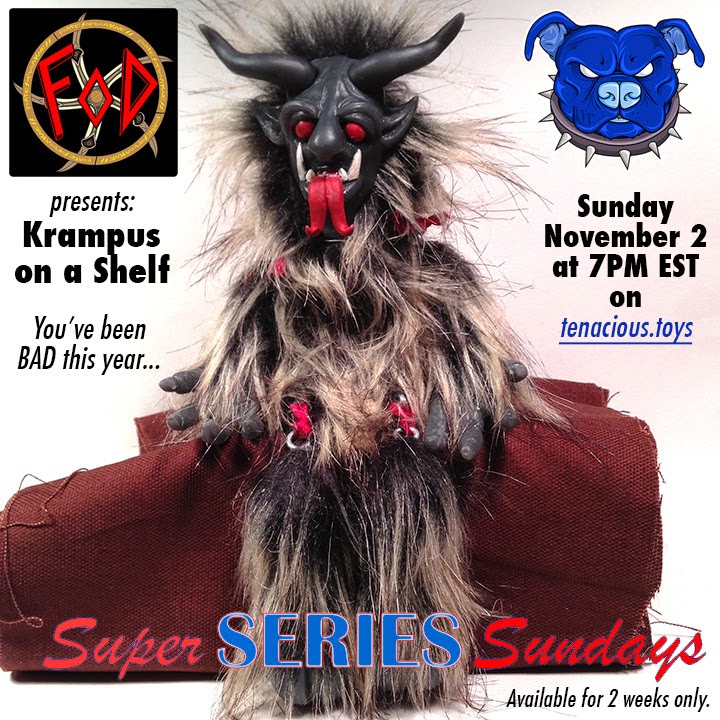 If you want your kids to behave themselves in the time leading up to Christmas, why would you put some little sissy on your mantle that's gonna supposedly go off and rat em out for the bad stuff they do? Kids know that snitches get stitches and they're not gonna take some dainty little elf seriously.  What you need is some crazy looking demon guy that will stuff them into a bag and beat the tar out of them with a stick.  Now that's something that will make even the littlest psychopath think twice before giving into those bad voices in his head.

Krampus is the greatest thing to happen to Christmas since presents, and it warms my heart to see people in America start to embrace Santa's enforcer.  Now if only we could start working him into our holiday traditions.  Kids need a healthy dose of fear.  They need a freaky goat man to smack them around as they stare mindlessly into their cell phones instead of taking out the trash.

Ok, this has nothing to do with what I'm talking about, but I couldn't stop laughing at this video when I saw it.  It is Christmas themed though:

Krampus on the Shelf was created by Forces of Dorkness to watch over your little nut jobs as they go about their heathen ways.  They are going up for preorder this Sunday, November 2nd, at 7pm as part of Super Series Sunday from Tenacious Toys.  You'll have two weeks to place your order for one of these dudes, who stand 8 inches tall and retail for only $50.  It's cheaper than putting those little monsters in obedience school (do they have that for kids?).  Get yours at http://www.tenacioustoys.com/