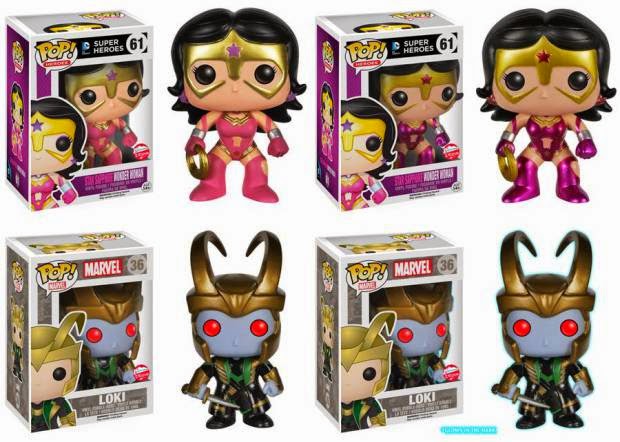 I have a bit of a problem in the fact that even when I narrow my collecting scope, I still want everything that's ever made that I can get my hands on that falls within my restrictions.  In the world of Pop! Vinyl I like a lot of them, but my main focus is Batman.  Seems reasonable right?  Until you learn that there are like 1,000 different iterations of Batman.  And who has to have every single one of them? This guy.  Thus far I have 11 of them, which isn't bad being that some of them are pretty hard to find exclusives.  But it is kinda fun tracking them all down, and I almost enjoy that part of it more than even owning the figures.

I have a lot of other Pop! Vinyls from Funko, including a few from the Thor movies, which makes these two versions of Frost Giant Loki pretty tempting.  Both of them as well as the Wonder Woman figures are Fugitive Toys exclusives for this weekend's New York Comic Con.  If you want any of them I would make a bee line to booth # 410 cause there's always a lot of interest in any Funko exclusives.