Custom Toy of the Week: We Become Monsters 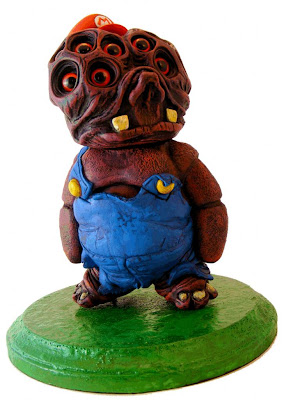 Is it any wonder that Lance Armstrong and countless other athletes risk turning their man grapes into raisins in order to become awesome athlete types?  All anyone has to do is look into their childhood's to see what a horrible influence Super Mario Brothers was.  He constantly took performance enhancing drugs and you know what they led to?  Fame, tons of gold coins, and the hottest girl in a land full of hammer-tossing turtles.  And he grew to behemoth proportions.  But never have we been exposed to the downside of relying on a fungus to make your life worth living....until now.

We Become Monsters dared to ask what would happen if Mario got ahold of a bad batch and the results are terrifying.  This custom figure was made for the "Game On" art show at 1AM in San Francisco next week and should serve as a warning to us all to never buy drugs from that weird guy down the street who is always wearing the same shirt that probably hasn't been washed since he bought it in 1974 from that Foghat show and that won't stop talking about the one time he met Jimmy Carter outside of an Old Navy in Atlanta during this crazy sale they were having on cargo shorts.  I mean, don't do drugs kids.