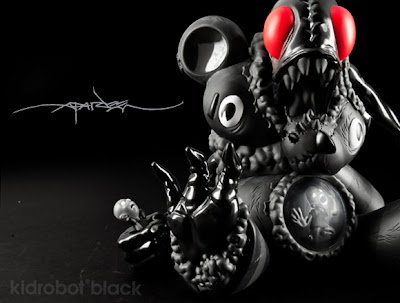 I still have my teddy bear from when I was a child.  It was a Winnie the Pooh, and I carried that little sucker with me everywhere.  So much so that all of his fur came out and he's been stitched up more than Joan River's face.  He's kind of grotesque, like a small little corpse, which may explain a lot about how I turned out.  Luckily for me though, there were no crazy monsters living under his tattered plush.

Meet DigesTED from Alex Pardee and Kidrobot Black.  This monstrosity may have once been a a nice teddy bear, but now he has morphed into something horrific and has developed a taste for the blood of children.  They made 250 of these twisted figures and they will be $200 when they are released on March 28th.  It's perfect for those of you that have a new baby and are looking for that extra special something to finish off their nursery.  If you want to raise the next Ted Bundy.