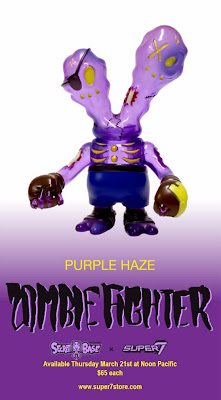 There's this big controversy over whether or not to let this lady who was once a dude fight other ladies in MMA.  It's kinda strange I must say, but it doesn't address the real issue of our times.  Do we let zombies fight regular humans?  They don't feel pain (unless you shoot them in the head), they will never yield to whatever submission hold you try, and they bite which is a big no no in the rule books.  Now if we started a zombie fighting league that would be entertainment.  And 100% better than that robot fighting crap that SyFy is trying to sell us as being cool.  It's not.

If zombie fighting were a legit, sanctioned sport, my money would be on this guy from Secret Base and Super7.  After all, he's got two heads, which equals twice the concussion-sustaining power.  And he also looks like he's taken some serious damage and still come back for more, kinda like Lindsay Lohan.  You can add him to your stable of fighters tomorrow at noon Pacific time at www.super7store.com.
Posted by Chris at 6:06 AM