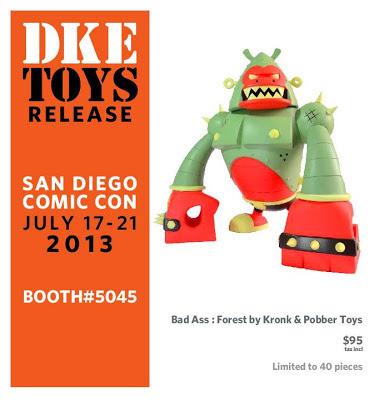 I read an interview with DKE owner Dov that was conducted by Tenacious Toys that basically said you better bring some cool stuff with you that no one else has if you're going to bother setting up at conventions.  Of course, there was more to it than that, but you can clearly see the philosophy put to work in not only the amount, but the quality of exclusives that he is bringing to San Diego Comic Con.

Like this gloriously massive toy from Kronk x Pobber appropriately named "Bad Ass".  That is one angry monkey and you can believe that this sucker is going to sell out the moment it's released.  Only 40 pieces were produced in this Forest colorway and they will be $95 each.  Better get in line early. 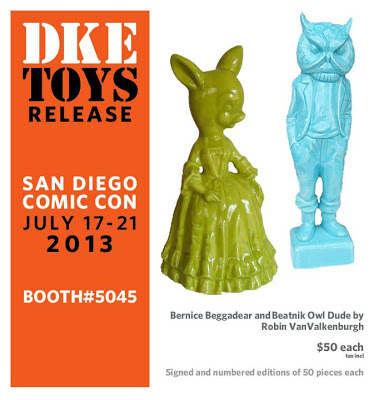 And now for something completely different.  When you think about it, most of us aren't playing with the toys that we buy; we are using them as objects of decoration to make our dwelling more pleasing.  So with that thinking, the materials that toys or collectibles are made of are irrelevant.  Why not ceramics?  Even better, why not awesome mash up ceramic figures from Robin Van Valkenburgh?  I had never heard of this particular artist before now, but after seeing this picture and then looking through their Twitter posts, I am hooked.  Equal parts sweet and disturbing, I must now own every single one.  These could very easily be the sleeper hit of the convention. 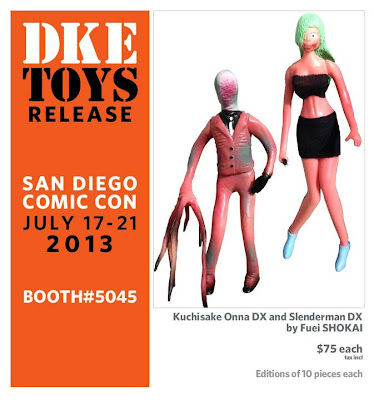 There's absolutely nothing sweet about these two.  In fact, they look as if they've crawled from an infected wound and are off to terrorize children at summer camp. I'm pretty sure Fuei Shokai would be thrilled if no one were ever to sleep again after looking at their creations.  If one bites you don't say you weren't warned.
Posted by Chris at 10:34 AM