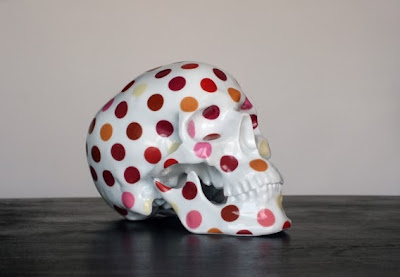 I've been reading that book The Devil in the White City about the murderer H.H. Holmes and the Chicago World's Fair.  Pretty fascinating stuff, but one of the more interesting things I learned about was this organization called The Whitechapel Club.  Named after the area in London where Jack the Ripper committed his crimes, this was a group of reporters who gathered to talk about the grisly crimes of the day.  Their meeting place was filled with crime scene items given to them by the local police and real human skulls taken from the bodies of unclaimed asylum patients.  I think that if they had a member with a knack for design this could have been the direction their decor would have taken.

NooN and K. Olin Tribu have released this newest edition in their line of craniums, only this time they adorned it with polka dots.  Be one of the lucky people to own this by going to http://www.artandtoys.com/.