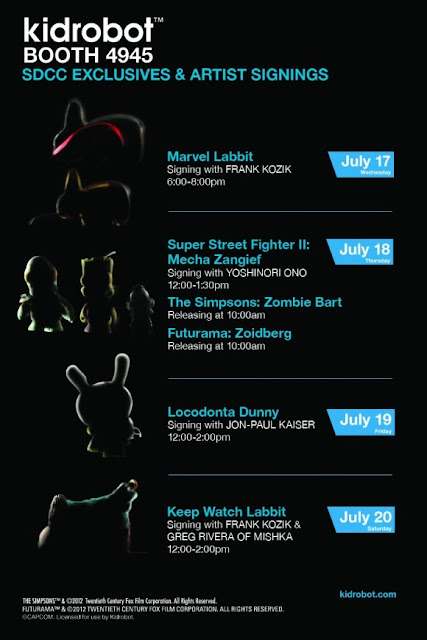 Well, looks like my work here is pretty much done.  Kidrobot has just released this handy guide to their releases and signings at next week's San Diego Comic Con.  I saw the mock ups for the Marvel Labbits at Toy Fair and they look pretty killer.  They are definitely the coolest licensed items Kidrobot has released thus far.  There are, however, two releases that I really, really, really, really want.  The first one being the Locondonta 8" Dunny from Jon-Paul Kaiser.  This one is supposed to be different from the smaller version that just came out in the 2013 series but no matter what it's going to be on my wish list until I can track one down.  The second is the Keep Watch Labbit from Frank Kozik x Mishka.  Even without seeing it you know it has to be amazing.  The last two artist series Labbits that were convention exclusives were made into retail releases using different colors, so I'm hoping something similar happens with this one.  Ditto on the Dunny.
Posted by Chris at 1:43 PM