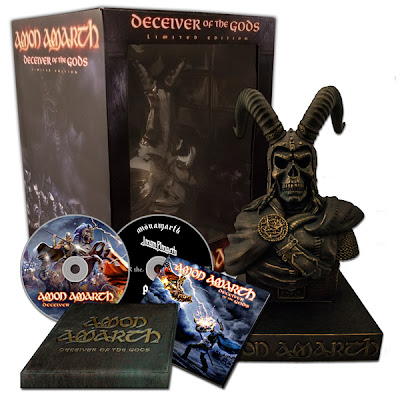 I don't talk about music much on here because it rarely pertains to the world of toys.  So imagine my excitement when one of my favorite bands releases an album and a killer bust to go with it.

For those of you that don't know, Amon Amarth is the greatest viking metal band in the world.  They make intense music about Norse Mythology, which is another one of my many obsessions.  Listening to them will make you want to pick up a sword and rush headstrong into battle. Just remember to put your helmet on first.

Their new album comes out on the 25th and they are releasing this limited edition box set filled with cool stuff.  Sure you get the album, a bonus e.p., and a poster, but the highlight of this deal is the bust of Loki.  This master of mischief stands 10 inches tall and would look pretty fancy next to your mead horn.  You don't see Lil Wayne putting out anything like this.  For $99 you get everything you see above, which is really cheap considering the size and detail in that bust.  Order yours now from http://www.metalblade.com/amonamarth/order.php or risk never sitting with Odin in Valhalla.